Mozart’s Solemn Vespers always seem to me to be a workmanlike piece that trundles along until it reaches a moment of pure genius at the ‘laudate dominum’. Tonight’s performance did nothing to really change that impression. The early movements were engaging enough but then Jérémie Rhorer pulled his forces back to provide a ‘laudate dominum’ of rapt distinction with beautiful orchestral tone and a willingness to let the music breathe for itself. He was well served by the fine Chœur ‘Les Éléments’ and his own orchestra. The choral singing was astounding for its blend and clarity of tone and they sang flawlessly throughout the entire evening. I only wish that Rhorer had instead asked the wonderful Ann Hallenberg to sing the ‘laudate dominum’ – she would surely have done a much better job than the strenuous Sally Matthews. There is a body of evidence that points to a change of voice after pregnancy and Matthews’ voice has darkened significantly and lost some of the ease above the stave that she formerly had. I would say that she is well on her way to becoming a Strauss and Puccini soprano rather than a Mozart one although she did a much better job in the Mass. Her ‘et incarnates est’ was indeed a thing of beauty accompanied by characterful wind playing. Earlier there were some wrong notes here and there but she acquitted herself well over all.

I just wish that Hallenberg had had a bit more to do. She is a somewhat underrated singer but one of the best mezzos around today. She is a complete artist, the coloratura dispatched flawlessly in the mass, the voice actually sounding brighter than the 1st soprano. Perhaps she could have added some discrete ornamentation here and there (Véronique Gens recording is a model on how to do this) but otherwise she was dream casting in that part. Rainer Trost sounded a bit dry but otherwise gave an efficient account of the tenor part in the Mass. Nahuel di Pierro is certainly a very handsome stage presence but his voice lacks some of the amplitude required to dispatch this music. He is very young though and I am sure that he will develop further.

Rhorer’s conducting tended to drag slightly in the slower sections – perhaps with bigger forces in a more resonant hall this would work – in the dry-ish Barbican acoustic however, they had a tendency to drag somewhat. Perhaps he could have concentrated on pointing the rhythms in the orchestra more in order to achieve more of a sense of forward momentum. At other times, some of the slower tempi worked perfectly well – in the ‘laudate dominum’ and the ‘et incarnates est’ for example. This is the third period orchestra I have heard in the last few weeks and certainly the best. The playing was top class and a suitable complement to the outstanding chorus. Just one small thing grated – why create a performance with period instruments and a small-ish choir and then use the modern standard Latin pronunciation? Surely, it would have been better to use the Austro-German pronunciation that Mozart would have expected?

Finally, why is it that some people absolutely need to speak during the music? I had a couple behind me who insisted on whispering their way through the vespers. Fortunately, my withering look shut them up at the start of the kyrie. Don’t they realize that they are ruining other people’s enjoyment too?

It was a great evening and a terrific introduction to a superb chorus, orchestra and mezzo.

UPDATE 2011/2/7: I seem to have been getting a large number of hits through Facebook.  A little investigation led me to discover that Miss Hallenberg had been kind enough to feature my review on her page. I was thrilled to discover that she appreciated my feedback on her performance.  As I don’t do Facebook, I can’t thank her through there but I wanted to express my thanks in some way.  A gentleman who subsequently read my post took issue with my use of ‘underrated’ to describe Miss Hallenberg.  I meant it simply in the sense that here is one of the finest singers around today who doesn’t get as much attention in terms of big record deals as other singers who may not be as musically gifted or technically proficient. 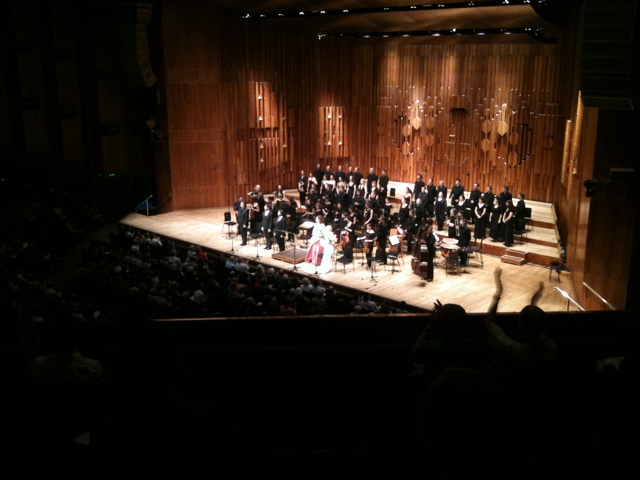