In the forest, anything can happen…

This was my second Calixto Bieito production in a matter of days having seen his Shakespeare ‘mash-up’ Forests at the Barbican Centre two nights before. I am a great admirer of his work and Forests, quite frankly, was a disappointment. Since it was not based on any one particular text there was a lack of narrative as if he was trying to make something out of something that just couldn’t be. It also felt déjà vu since, with its treatment of the course of life, it covered similar ground to his production of Il Trionfo del Tempo e del Disinganno at the Staatsoper Stuttgart. That was one of the finest and most moving opera productions I have seen in years and ultimately, the reason why I think it was more successful is because Bieito was working within a clear framework – that of the music itself. In his interview in the program for Forests he mentioned that in theatre, he can use the text as a starting point and alter it at will, whereas in opera, because of the shape of the music, he is obliged to keep within the limits set by the composer. Ultimately, this is why I think Bieito is one of the finest opera directors around today – he is willing to think differently about a work, yet as far as I am concerned what he does is certainly not unmusical, although I am fully aware that there are many who do not share this opinion.

In common with Forests, Der Freischütz deals with the forest and here it is a dangerous place where people lose sense of who they are. The production was set in a modern-day location where hunting and guns rule (is he referring to the central United States?) and violence is endemic. Indeed, the curtain opens on a celebration, complete with ‘national’ flag where a young woman is murdered and her blood shared around the community. Max starts the evening as an uptight outcast who is deeply in love with Agathe but who rapidly loses all of his senses once he gives himself up to evil. Indeed, that was one of the most harrowing scenes I have seen on an opera stage as Vincent Wolfsteiner’s Max descends rapidly into madness. Much has been written about the nakedness here and it is unquestionably an extremely brave performance. But it is so much more than that. Wolfsteiner has the measure of the music and sings the role superbly. The end of Act 2 in particular was harrowing. It was an extremely physical performance yet he never lost sight of the musical imperative of the work. I’m not sure whether Germany has an awards ceremony for opera but Wolfsteiner should certainly be in the running for an award on the strength of his performance. I would very much like to hear him again.

Indeed, the men on the whole were excellent. Carsten Sabrowski’s Kaspar was the epitome of evil – Bieito cut the character of Samiel and imagined Kaspar, addressing Samiel as addressing a part of himself. Günter Papendell’s Ottakar stood out as did Alexey Antonov’s Hermit. The ladies also did well on the whole. Julia Giebel’s Ännchen was a perfect foil to Ina Kringelborn’s Agathe. Kringelborn has an attractive voice and she is a beautiful presence on stage. She didn’t quite turn the corners in ‘Leise, leise’ as elegantly as she could have. Still, the voice is certainly there and I imagine that she is headed to even heavier rep – Elsa, Elisabeth and Senta can’t be far away.

The chorus was a bit rough and ready and certainly no worse as a result of that. Mihkel Kütson’s conducting was absolutely superb. Tempi were well chosen and the orchestra played like heroes.

This was a gripping and exceptional piece of theatre. There were a lot of boos at the end and it may well be that a number of people in the audience were upset by Bieito’s willingness to see the work in a new light. Yet for me, it was a superb evening because nothing he did was unmusical and at the same time, Bieito managed to create a show that perfectly encapsulated the violence inherent in society and the extremes that those who live on the fringes of society can occasionally be taken to. 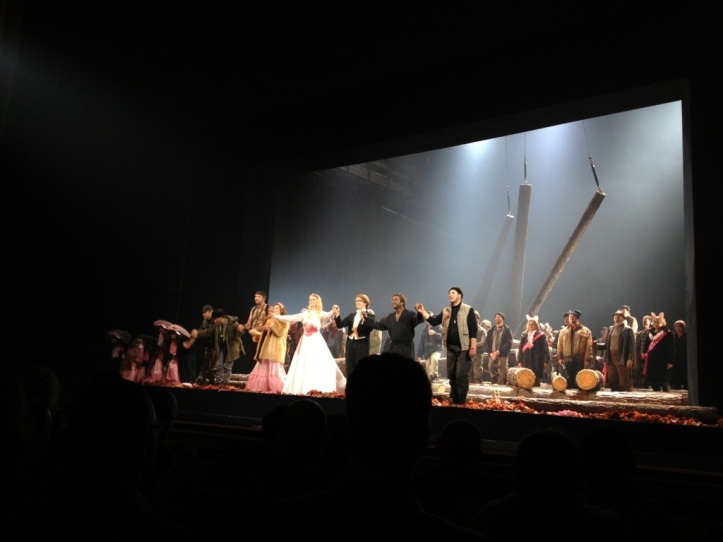