A world turned upside down

This was my second show of 2013 and the second of this particular trip to Berlin. The previous evening I had attended a performance of Lucia di Lammermoor at the Deutsche Oper. Despite a promising cast and a conductor who really impressed me the first time I had heard him, the show didn’t really take wing as it could have. The Rosenkavalier this evening was a revival of Andreas Homoki’s 2006 production and it is certainly the first hit of 2013. It has been thoroughly rehearsed and cast with a group of superb singer actors all of whom more than equal to the challenge of their roles.

Homoki took as his starting point the fact that for many, despite her appearance only in the 1st Act and the latter part of the 3rd, the Marschallin – rather than Octavian – is the central character of the opera. He sees the piece as representing the end of an era, her world – literally – turning upside down. We start the evening in a palace, we end it with the set upside down from the beginning and the Marschallin left alone, desperately trying to rip off the straightjacketing elaborate costumes she had been forced to wear. Indeed, the costumes (Gideon Davey) were also used to show the passage of time, with the characters introduced in each act wearing costumes of a different era. This was most striking at the start of Act 2, when Ochs and his men entered the room, they looked like primitive savages against the elegance of the Faninal household.

Musically, it was a fantastic evening with a cast, almost all of whom were new to me. South African soprano Johanni van Oostrum was a real discovery. She has a full-bodied, creamy lyric soprano capable of carrying over the orchestra. She is also a dignified and captivating stage presence. Karolina Gumos was an ardent, ruby-voiced Octavian, seemingly tireless from beginning to end. Maureen McKay’s Sophie was sweet and she tried some daringly quiet pianissimi. Jens Larsen’s Ochs was enormous – he’s a very tall gentleman and the voice is huge. He does lack some resonance in the very bottom of the range but that is part of the course with this role. He was a more handsome Ochs than we normally get although while we never quite felt sympathy for him, he did seem incredibly realistic rather than simply a caricature. Supporting roles were very well taken with Christoph Späth’s Valzacchi, Caren van Oijen’s Annina and Tom Erik Lie’s youthful Faninal the pick of the supporting cast.

Another revelation was Henrik Nánási’s conducting. I must admit never to have heard of him before – it transpires that he is the Komische’s new music director – but he led a reading of great distinction. He kept the piece flowing beautifully and was alert to all the quicksilver changes of mood that abound in the work. The final trio and duet certainly did not ground to a halt in the way that some other conductors make it. He also elicited some ravishing playing from the Komische orchestra who once again revealed themselves as an excellent band. The end of Act 1 in particular was wonderfully played. The brief choral interjections were very good and the children’s chorus in particular was very well trained by Dagmar Fiebach. It was especially wonderful to hear this work in a relatively small house (1200 seats).

This was an exquisite performance of a wonderful work, one that managed to perfectly encapsulate the end of an era. 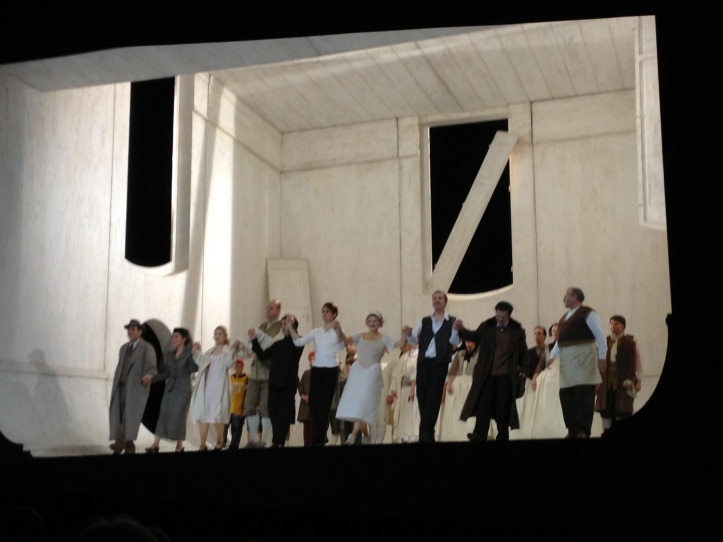 Today I had the privilege of seeing a concert at this phenomenal hall by the Philharmonisches Staatsorchester Hamburg of music by Widmann & Beethoven, conducted by Kent Nagano. The hall is staggering. The acoustic, at least from my seat, bright and immediate. I’ve waited 5 years to visit but hope to be back very, very soon #operatravelling #concert #konzert #orchestra #orchester
Curtain call after Lucia at the Staatsoper Hamburg. Some really satisfying singing with a Lucia in Nina Minasyan who demonstrated a fabulous technique. Niermeyer’s staging was extremely visual but made direction of the principals feel like an afterthought #opera #operatravelling
I’m so happy to be starting my operatic 2022 at the Staatsoper Hamburg for Lucia with Minasyan, Hotea, Bogdanchikov, Martirossian & more. Sini conducts Niermeyer’s staging. #opera #operatravelling
This view would have made countless sailors happy over the years. And it makes me happy too, to be in this amazing city #operatravelling #boatride #brisk #bracing #Elbe #heimathafen
Bit of a brisk day today but this view is always spectacular #operatravelling #binnenalster #binnenalsterhamburg
Took this photo last week. After two very difficult years, perhaps we can dream that brighter days are ahead. We just have to get to them #feliz2022 #happynewyear #brighterdaysahead☀️🌈