Macbeth and the Last Days of the GDR

So much of singing Verdi’s music revolves around having a solid legato that allows the singing to create long lines with seemingly effortless breath control.  When I think of examples of superb Verdi singing that I have heard in theatre, I always think of Violeta Urmana’s Amelia in Madrid in 2008 and Anja Harteros and Mariusz Kwiecien in the Royal Opera’s Don Carlo earlier this year.  What all three had in common was the ability to do complete justice to the music through the spinning of long lines and concentrating on beauty of tone.  I had this very much in mind at the end of tonight’s Macbeth.

Last year I had the pleasure of hearing Jennifer Larmore as Lady Macbeth in Geneva and it has permanently changed the way I hear the opera.  Just as I hear the role of Énée in Les Troyens as a heroic Rossini tenor compared to the heldentenors normally cast, in Lady Macbeth, I hear a heroic Rossini singer, one capable of doing justice to the florid writing that abounds in the piece, but who is also capable of dominating the ensembles where required.  We will never know what Marianna Barbieri-Nini, the original Lady Macbeth, sounded like but I would wager that given she was a noted exponent of Anna Bolena and Semiramide  she sounded a lot closer to what we consider today to be a Rossini mezzo/soprano than the dramatic sopranos and mezzos more often cast in the role.

Tonight, Marianne Cornetti, provided some excellent singing as Lady Macbeth.  She is perhaps not the most gripping singer but she is warm and honest and she sang all of the notes, singing two verses of ‘or tutti sorgete’ (sadly the second verse wasn’t ornamented) and offering a beautifully placed top D-flat at the end of the sleepwalking scene.  She is very much a Lady Macbeth in the Cossotto mould, warm tone with a slight rawness on top.  She turned the corners of her arias nicely enough although at times the effort was visible yet not necessarily audible.

I know how hard singers work to train and build careers and I hate writing entirely negative comments on individuals but Thomas Johannes Mayer’s Macbeth was a major disappointment.  Quite frankly, he should not be singing this role, at least in the way he was singing it. Tuning was all over the place, I don’t think he sang a single phrase entirely in tune.  His attractive lyric baritone was pushed far beyond its natural limits and it was severely uncomfortable to listen to.  His big set piece ‘pietà, rispeto, amore’ pretty much suffered the same fate as Banquo.  There is the core of a very attractive voice there but I fear for his career longevity if he continues to treat it this way.  The audience went wild for him but my experience at the Deutsche Oper is that audiences tend to go wild if they see a singer pushing it.

In many ways the same goes for Thomas Blondelle’s Macduff.  His attractive lyric tenor was pushed far too hard at the expense of beauty of tone and legato.  Earlier this year, I heard Pavol Breslik sing Lensky at the Royal Opera House and that was on object lesson in how to sing a role that is perhaps a size too big without compromising beauty of tone.  I really wish more singers would think in that way.

Albert Pesendorfer’s Banquo sang with apologies for a cold but no apology was needed for his firm bass that delivered a splendid account of his aria.  The Deutsche Oper Chorus was on magnificent form.  Fantastic blend, tight ensemble and unanimity of tone were all present.

Paolo Arrivabeni conducted a big-boned account of the score that was nicely paced if perhaps without the pin-point brilliance of Ingo Metzmacher in Geneva last year.  I just wish that he had pointed the rhythms a little more and insisted on perhaps a little more lightness.  The sound that he got from the Deutsche Oper orchestra was magnificent though, big and dark.

I’ve seen quite a few Robert Carsen productions over the years but none has convinced as much as this.  I really enjoyed the GDR aesthetic that he brought the work.  Essentially the piece was set in a concrete bunker and costumes (Miruna Boruzescu) reflected the last days of communism.  Working within this context of (literal) backstabbing worked really well with the libretto and the whole show was absolutely gripping.  Definitely one of the best things I’ve seen Carsen do.

Macbeth is definitely one of my favourite Verdi operas.  If I was pleased with the production and with Cornetti, I’m afraid that I was concerned to hear a gifted artist push his voice beyond its natural limits.  Shows that I have seen at the Deutsche Oper tend to be hit or miss and it often seems that I have seen more misses than hits.  Overall tonight was definitely a hit and I would very much like to have the opportunity to see this particular staging again. 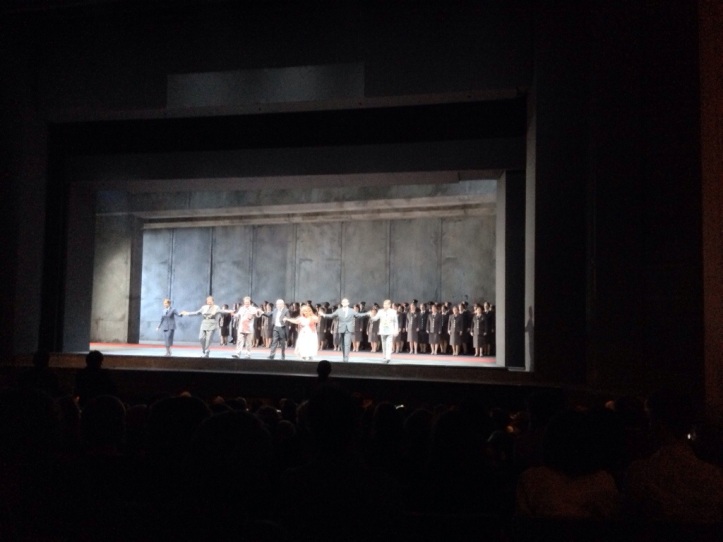