Trip Report: A visit to the Osterfestspiele Baden-Baden

The Baden-Baden Festspielhaus, has over the years developed itself as a destination for music lovers from all over the world.  Situated in the historic Black Forest spa town, attending an event there is a real experience.  It is easily accessible from any point in the world.  Frequent trains link the town in around 85 minutes with Lufthansa’s hub at the large Frankfurt Airport.  I can’t say I’m a fan of Frankfurt Airport and I would never under any circumstances recommend it for connections but as an airport to arrive and depart from, other than long walks and interminable waits for bags, it’s ok.  The train station at the airport is a 10 minute walk from the terminal.  Another option is to arrive at Stuttgart or Strasbourg airports which are both short train rides away.  Baden-Baden has its own airport, mainly serviced by Ryanair and it is located on a short but infrequent bus ride from the town.  Finally, another viable option is to fly into Basel and this is actually what I did on the inbound journey.  Sadly Swiss are cutting their routes there but it is also a hub for Easyjet.  The airport is a short ride from the main train station and an additional 10 minute tram ride brings you to the German train station in Basel from where fares to Baden-Baden are actually quite reasonable.  Upon arrival in Baden-Baden the city bus number 201 will bring you to the Festspielhaus and the centre of town for EUR2.30 (free with a ticket for the evening’s concert). 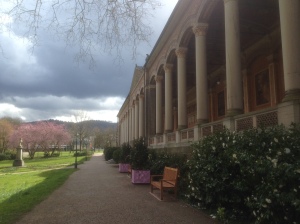 I stayed at the Hotel Löhr which is based in three buildings just off the Augustaplatz in the centre of the town and a gentle 15-minute walk from the Festspielhaus.  It offered clean and comfortable accommodations with free wifi.  There was no elevator in the building I was in.  Reception is open at the same time as their restaurant and special arrangements would need to be made for those arriving later.  A single room cost EUR101 for two nights which is more than reasonable for the festival period and there is an additional city tax of EUR3.50 per night.  It’s a nice place to stay.  Breakfast (included) was advertised as being from 7:30 – 10:30.  When I arrived for breakfast on the first day at 10:00, there was very little left and nothing was replenished nor was I asked if I wanted something they had run out of.  I got to see the full breakfast buffet the next day as I had an early start.  There was a selection of (pork) meat, some cheese, sausages and scrambled eggs.  There were also croissants, rolls, cereals and yogurt.  I’d certainly stay there again.

The Festpielhaus itself is a comfortable theatre.  The seat prices are high and disappointingly the place was only half full on both nights.  Given the quality of the performances it is a real shame as they were truly exceptional and deserved to have a wider audience.  The audiences are very mature and it is a very dressy theatre, more so for the opera than the concert performance.  Interestingly, the theatre actually offers a package booking service for those coming to events which includes tickets and hotel accommodations and this might be an option for those who would like to book everything together.

Baden-Baden is a small town but there are quite a few things to keep one busy during the day time.  The beautiful casino, the spa itself, walking in the hills above the city, taking a trip on the Merkurbahn to see over the city or strolling around and enjoying the many chocolate boutiques.  There are a number of restaurants in the centre and they seem to usually be open after the shows with bars open until 1 or 2am.

I must admit that I thoroughly enjoyed my time in Baden-Baden.  It was such a relaxing place to enjoy some outstanding performances with some of the greatest artists in the world.  I also received a very warm welcome from all the theatre staff I came into contact with.  Baden-Baden is certainly worth a visit and I look forward to going back very soon.