Today marked my first visit to Turin’s fabulous Teatro Regio.  A fantasy of red and white, the auditorium has great sightlines from every seat and is blessed with a warm and resonant acoustic.  The welcome is cordial and the quality very high.  The city itself is a gem – an elegant and quite sophisticated downtown with excellent gelato, as one would expect in Italy.  It is certainly a most agreeable place to see a show and while this was my first time, I definitely hope that it won’t be the last. 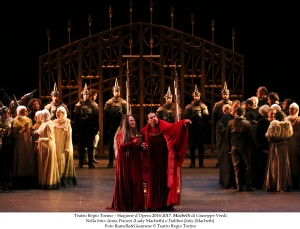 As is so often the case, there were a few changes to the advertised cast for this Macbeth.  The originally-billed conductor, the Regio’s music director Gianandrea Noseda, withdrew due to injury and was replaced by Giulio Laguzzi.  Shortly before curtain up, an invisible voice announced that Marko Mimica would step in to sing Banco – Mimica was already scheduled to sing in the alternate cast.

The staging was the work of Emma Dante.  She brought together not only the house chorus but also actors from her own company.  There was a strong dance component to this production – dancers would be involved in creating imagery, while the chorus was arranged around the side or at the back.  At its best, it created some impressive stage pictures.  Certainly the scene of the dancers unrolling Macbeth’s cloak during the banquet scene while he was trapped on a platform, only for Lady Macbeth to put it on instead, really brought home the fact that the Lady was the motivating force behind the action.  At other points, one was left with a less coherent message, like the copulating witches at the start, or the hand movements of the chorus as the dancers danced around them.  At least one had the benefit of seeing buff, bearded gentleman dancers jumping around in their underwear.  Even the parking of the chorus on stage had its benefits in a ‘patria oppressa’ where, arranged in rows at the back and dressed in black, there was a stillness and melancholy that contrasted well with the constant movement earlier on.  Ultimately, this was opera as spectacle and if there were some interesting ideas that seemed not quite fully formed, it was never less than interesting to look at – certainly not with the dancing beds that accompanied the sleepwalking scene. 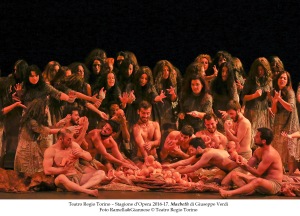 Musically, however, there was a lot of pleasure in today’s performance.  Anna Pirozzi was a tremendous Lady Macbeth.  She was on thrilling form today, commanding the stage from her very first entry and managing to hold the attention even when singing quietly among those dancing beds.  Sadly, she was denied the opportunity to read the letter as Dante had Macbeth give it as a speech to her, but she launched into ‘ambizioso spirto’ with exhilarating abandon.  Naturally, the role was sung off the text and she was able to turn the corners nicely in ‘or tutti sorgete’ (both verses but sadly not ornamented) and later on in the banquet scene.  She even made a respectable attempt at a trill.  Her copper-toned soprano was darkened slightly and throughout one felt in the utmost security with her vocalism.  Most impressive.

Dalibor Jenis gave us a Macbeth that was truly sung, far from the barkers we often hear in the role.  His isn’t the most glamorous baritone – it’s somewhat narrow in tone and there seem to be a limited range of tone colours, but this is a small price to pay for singing of such musicality.  The voice does carry well, is even in emission, registers are well integrated and the voice was always used within its limits.  His ‘pietà, rispetto, amore’ was sung with an excellent line and admirable breath control.  Piero Pretti was a superb Macduff.  His full-throated ardour gave much pleasure and his musical instincts were displayed at their best in an ‘ah, la paterna mano’ that was lovingly phrased.  There’s a lyricism to his sound but also a hint of metal in the core.  Marko Mimica also gave much pleasure as Banco.  The voice is big, warm and wonderfully complex.  There is good resonance there combined with an easy line and this is a voice that will surely grow even bigger with the passage of time.  Mimica is still young and I look forward to following his development. 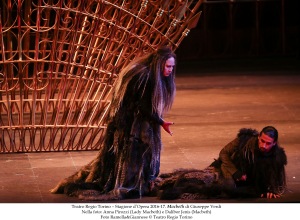 The remainder of the cast was excellent and certainly pointed to the high standards maintained by the house.  A special mention for Alexandra Zabala’s nicely fruity Dama with a generous chest register.  The chorus gave us a warm, full-bodied sound.  I especially liked the resonant basses and tart mezzos.  Ensemble was tight throughout the entire show.  Giulio Laguzzi led a reading that was nicely swift with a splendid precision of attack as sharp as the knife that killed Banco.  There was a slight thinness of tone in the violins but that might just have been where I was sitting.  Certainly the brass playing was excellent – menacing within the textures in places and in others delightfully raucous.  Laguzzi was a sensitive accompanist but he also brought out so many varied colours in the score – the lunar shadows of the sleepwalking scene or the bright joviality of the opening witches’ chorus.

This was a Macbeth that gave a great deal of pleasure musically.  The staging however did have some nice ideas but ultimately perhaps worked better approached more as a visual spectacle than a penetrating consideration of the nature and corruption of power – which it never in fact claimed to be.  It looked good and sounded even better.  Sadly, this was the last performance of the run but it really was worth seeing for Pirozzi, Jenis, Pretti and Mimica, and Laguzzi’s exciting conducting.  The theatre itself is a gem, the house forces excellent and is most certainly definitely worth a visit.

If you value the writing on this site, join the Patreon community and help support independent writing on opera.  Alternatively, you can support operatraveller.com with a one-off gesture via paypal.

#tbt to this day last year when once again I saw that view of that one place in the world that will always be home. I have no idea when I’ll be able to go back again but I do know that as soon as it is possible, I’ll be there. Montréal, tu me manques toujours #tbt #noplacelikehome #maville #view #vue
Keep a seat at the table for me. I’ll be back soon, I promise #keephope #dontgiveup #betterfuture #keepgoing
Souvenirs of a year that didn’t turn out the way anyone would have liked. I thought long and hard about posting this but actually it’s a reminder of not giving up, of making the very most of life within the rules, and of the centrality and importance of art. I’ve had some really, really dark moments this year and I know that those months where I was able to deplace myself were literal lifesavers. The skies are full of clouds right now but there are glimmers of hope and, as I always say, as humans all we have is hope. I miss being able to see and hug my friends, miss my freedom of movement. The light at the end of the tunnel is in sight and brighter days will come, eventually, even if they seem very distant right now #dontgiveup #betterdayswillcome #keephope #makethemostofit
Received a reminder that it’s now 10 years since I started the site. In the last decade I’ve seen some incredible shows, visited all the world’s major houses & sat down to interview some of the greatest singers of today. It’s been one hell of a ride and while I wouldn’t have wanted to celebrate the 10th anniversary watching a show from my couch it’s still one hell of a milestone. Here’s to the next 10 years. #opera #operatravelling #10yearanniversary
On this #worldoperaday a view of the beautiful auditorium of the @staatsoperhamburg a house that’s always a pleasure to visit. Right now so many houses are shuttered and artists unable to work. Yet we need live opera more than ever. #opera #keephope
More fall colours in Hamburg #fall #automne #herbst