Of Redemption and Saviours: Parsifal at the Oper Stuttgart

Calixto Bieito’s 2010 production of Parsifal, tonight revived by Valentin Schwarz, has been much discussed over the years but until now, I had never had the opportunity to see it.  After an absence of a few years, the Oper Stuttgart, finally revived it with a very promising cast and the excellent house forces.  In common with Dmitri Tcherniakov’s Berlin Staatsoper staging, Bieito gives us a study of the blind power of belief – the need for people to find an all-encompassing faith in something that will give answers.  As with his staged Verdi Requiem, seen in Hamburg a few weeks ago, there is a desperate cry of ‘libera me’ here, but from what remains to be seen.  Bieito’s staging is ambitious and undeniably complex – perhaps impossible to completely take in on a single viewing.  It explores themes familiar in his oeuvre: the ability of the powerful to mislead the masses, as well as the relationship between men and women.  For those of us who have made our home in the UK, the idea of how a fool can hoodwink a people into acting against their own interests feels incredibly raw and powerful.  Bieito also strips away the mysticism and piety that have developed around the work, instead, giving us something, quite literally, iconoclastic. 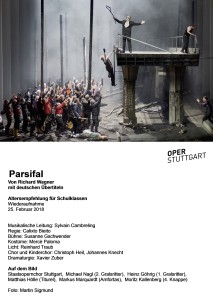 We are confronted by a society in ruins.  There seems to have been some kind of environmental catastrophe, perhaps nuclear war or perhaps an industrial accident.  The most impressive sets (Susanne Gschwender) reflect a gray wasteland, trees devoid of leaves, a damaged bridge leading to nowhere.  The grail knights live in the ground, emerging wearing gas masks.  Within this unspeakable trauma, the search for answers and that need for belief in something, anything, that can explain what happened is overwhelming.  The grail is a collection of religious symbols – crosses, menorahs, chalices – the chorus holding up signs in English, German, Arabic, Hebrew, Russian, imploring for God and liberation.  Yet what can save a world that’s already lost?  The answer, initially lies with Amfortas and Titurel finding that ‘selig in glauben’, the unthinking act that belief is enough to find some higher purpose.  When the answers don’t come, the people revolt, viciously killing Titurel with Parsifal finishing Amfortas off.  In doing so, Bieito strips away the fake piety and instead gives us a brutal analysis of how absolute power can be gained by someone willing the play the game.  Parsifal is a fool – he mocks the rituals, baptizing the ground with a bottle of water.  For him, everything is a joke and the way that he manages to sway the crowd, to get them behind him, seems scarily easy.  The crowd’s need for a redeemer, and the salvation that comes with that belief in a redeemer, (‘Erlösung dem Erlöser’) is presented to us with quite horrifying immediacy.  As always, Bieito is a superlative director of choruses and his vision is thrillingly brought to life by the massed choral forces – every single person an identifiable character as well as a fearsome mass. 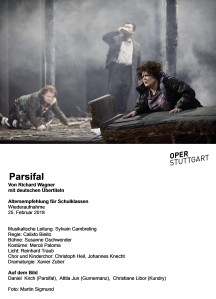 In this almost exclusively male society, women are unseen, heard in the distance except for two who are allowed to be there, but on the edges.  In doing so, Bieito brings a focus on the work’s inherent sexism.  That idea of seduction used by women as a way to prevent men achieving some kind of higher mission is highlighted and deconstructed, just as it should be.  The Blumenmädchen seem to have suffered their own kind of trauma.  They, in turn, are victims, prisoners perhaps of Klingsor who took advantage of the environmental catastrophe to enslave them.  Bieito also gives a bigger role to Kundry and it is through her that perhaps salvation can really be found.  In Act 3 she is heavily pregnant.  We don’t know by whom.  Perhaps it was as a result of the gang rape in Act 1 or perhaps due to her seduction of Parsifal in Act 2.  Perhaps it was even due to immaculate conception.  As so often in Bieito’s work, it takes one person to change the world and here that person is a woman.  There is a hope to Kundry as the curtain goes down.  She doesn’t succumb to Parsifal’s leading the way but instead gives us hope that through her, another way will be possible. 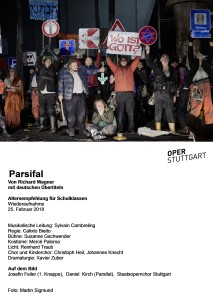 This was total music theatre.  The sheer depth of the performances, the intelligence of the concept and its execution, with a level of detail that is impossible to do justice to here, was absolutely staggering.  The technical audaciousness – the way that Bieito creates that fear that Klingsor should really produce, with Tobias Schabel using a flamethrower to set fire to the stage, was terrifying and physically overwhelming.  The way the crowd begs for answers yet not finding them, left me speechless.  The staging asks much of its huge cast and it was executed with such extreme dedication that it left me with so much admiration for all who participated.  Yet, it would not have had anywhere near the impact that it did have, had it not been for the excellence of the singers we saw tonight.  The clarity of the text was staggering, rendering the German surtitles unnecessary. 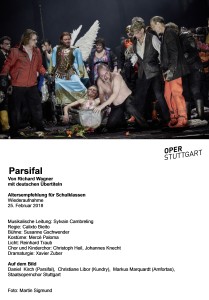 Christiane Libor was an impressive Kundry.  A true soprano, in Act 2 the voice took wing on the ever-rising phrases.  Where so many before her have run out of steam, she had room to spare.  She also brought out the difference between the more angular lines of Act 1 and the flowing lyricism of Act 2, making full use of an admirable legato.  If the register break in the lower part of the voice requires some careful negotiation, she more than made up for it with a top of impressive amplitude, her vertiginous descent from the B natural to C sharp on ‘lachte’ full of quite alarming pain, yet always sung, never screamed.  Daniel Kirch’s Parsifal was also securely sung.  If he doesn’t quite have the explosive power needed for ‘Amfortas! Die Wunde’, the sheer security of his vocalism gave much pleasure.  He was as fearless in his vocalism as he was in his physicality, completely dedicated to the vision of the work. 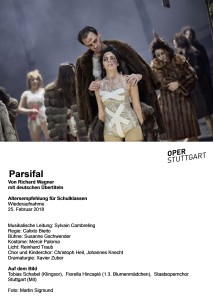 Attila Jun gave us a generously sung Gurnemanz – such clarity of German diction.  The voice, full and resonant, and the phrasing long-breathed and warm.  He tired somewhat towards the end of the evening but gave so completely of himself to us.  Schabel’s Klingsor was an athletic presence on stage, impressively pulling himself up to the bridge to nowhere.  The tone was somewhat acidic but absolutely firm and completely healthy.  Markus Marquardt’s Amfortas, took a little while to warm up but once he did, he gave us an impressively firm column of concentrated sound.   Similarly, Matthias Hölle’s Titurel sounded genuinely old, the voice still carved from granite.  The supporting roles were all extremely well sung, with a special mention for the mellifluous Blumenmädchen. 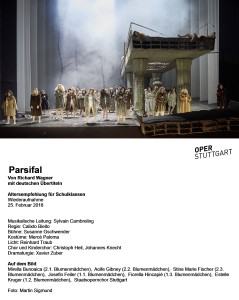 The chorus was most impressive.  The gentlemen firm and handsome of tone although pitching from the off-stage ladies was some distance away from where it needed to be.  We were given orchestral playing of supreme distinction from the ladies and gentlemen of the house band who played the room as much as they played their instruments.  The sound, so warm and resonant yet at the same time, incredibly clear.  The sound of the bells and timpani in Act 1 was staggering in its impact.  The brass, almost sweet in tone, the strings warm and full, and the winds full of character.  Sylvain Cambreling’s conducting was unobtrusive.  This isn’t damning with faint praise but rather it seemed of a piece with all that happened on stage.  He gave the score the room it needed to evolve, perhaps too much room in the seduction scene in Act 2, but also kept the massed forces on a tight leash with ensemble absolutely unanimous all night.  The quality and precision of the playing was astounding.

Tonight, we were witness to overwhelming music theatre in a staging that refused to take the piece for granted.  Always based in a convincing reading of the text, it was willing to rethink, revisit, to strip away the mysticism that has been allowed to develop around it and focus on the humanity, both ugly and beautiful, within.  Yet, the evening would have only had half the impact had it not been for the outstanding performances of such a dedicated group of singing actors in the principals, ensemble and chorus, as well as the superlative orchestral playing of a very rare quality.  The experience of the sheer warmth of sound will stay with me for a very long time.  This was a truly great night in the theatre.  It did what great art should always serve to do.  To make us reflect, to make us feel and to fill us with admiration for the dedication that these fine artists brought to it.  It was an evening to renew faith in the art form that is opera.

They say it’s often about the journey not the destination. But sometimes you can find a destination that’s definitely worth the journey #bridge #ponte #sunset #pôrdosol #plane #avião
Exploring the Tapada das Necessidades, a beautiful park that I pretty much have to myself and which has a spectacular view #park #parque #view #vista #sunday #domingo
Sometimes a caption isn’t necessary #sunset #pôrdosol
Refreshing on a hot day #refreshing #fountain #water #hiddensquares
Sunset last night over the Tagus. The colours seemed to get better and better as the sun descended below the horizon #sunset #pôrdosol #Tagus #Tejo
Some impressions of my first ever visit to the Uffizi #art #Firenze #arte