Elektra the Radical: Elektra at the Opernhaus Zürich

Getting to experience Strauss‘ mammoth score in a theatre as intimate as the 1200-seat Opernhaus Zürich is a rare treat.  Tonight, for their revival of Martin Kušej’s 2003 staging, the house invited the leading exponent of the title role today, Evelyn Herlitzius, as part of a very promising cast, consisting of both experienced and relatively new interpreters of their respective roles. 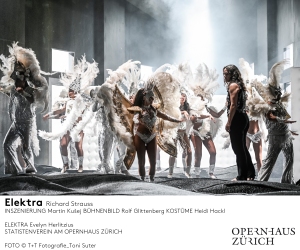 Having seen Kušej’s staging in its most recent revival back in 2015, also with Herlitzius, as well as on DVD, it still makes for a stimulating evening in the theatre.  Not least, of course the sight of samba dancers in the production’s trippier moment just before Elektra starts her final dance.  The palace is clearly a venue of debauchery, with cross-dressing and polysexual orgies, as well as the apparent sacrifice of a barely-clothed young woman as part of these activities.  Kušej really manages to bring out Elektra’s single-minded quest for revenge by highlighting her difference from the others who inhabit the palace.  Not only does she not engage with them, she lives apart while everyone else lives within the doors that line the set, a world we never get to see but where anything seems to be permitted.  This is most definitely a strength of Kušej’s staging.

Where I have an issue with it, is with his portrayal of the inhabitants of the palace as clichéd depictions of patients in a psychiatric unit.  As Elektra and Chrysothemis sing their closing duet, we see a group of people dressed in white, engaged in endlessly polishing a doorknob, or exhibiting physical ticks.  It comes across as gratuitous and lacking in understanding – and, unlike the samba dancers, I’m not convinced it adds anything to the narrative either.

It seems that every time I see her in the role, it feels that Herlitzius really is Elektra.  Tonight was no different.  Indeed, her portrayal felt even more immediate, thanks to the intimacy of the house, which allowed her to put the text over with the utmost clarity.  The voice took a little while to find the core, initially sounding somewhat grainy, but quickly found that unique blend of autumnal warmth and sheer cutting power.  The high C was most certainly there in the opening monologue, as it was in ‘was bluten muss’, bursting into the house with laser-like accuracy, combined with staggering amplitude.  It was fabulously loud.  Herlitzius rode the waves of orchestral tumult with ease, the sound absolutely thrilling.  Yet what also had perhaps even more impact, were the more reflective moments, in particular a recognition scene of incredible tenderness, one that revealed a mastery of word painting, the dreaminess of the repetition of the word ‘Traumbild’, for instance, bringing out a warmth in the tone.  It felt that tonight, Herlitzius found an even deeper truth to the role – and transmitted it to us.  Vocally, it was remarkable.  Textually, it was visionary.  Dramatically, her body incarnating every single switch of this complex character’s mood, both in vivid facial expressions and in her tireless physicality, it was extraordinary. 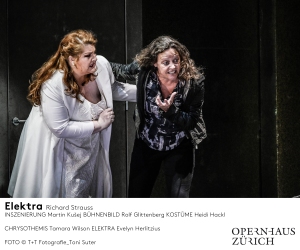 As her sister, Tamara Wilson, sang with pearly tone and more than held her own in the volume stakes with Herlitzius.  She had clearly worked hard on the text, the words always clear.  The voice soared easily in her ode to childbirth, but I did find a tendency for a touch of shallowness to enter the tone in the higher reaches, while the middle was firm and rounded.  That Waltraud Meier’s Klytämnestra has stage presence to spare, goes without saying.  As with Herlitzius, she made much of the text, rendering her Klytämnestra a deeply nightmarish figure.  The registers parted company in her mezzo a while ago, and the lowest reaches of the part were more often spoken than sung, while intonation came in and out of focus.  Fortunately, in a house this size, with Simone Young’s extremely supportive conducting, Meier was always audible. 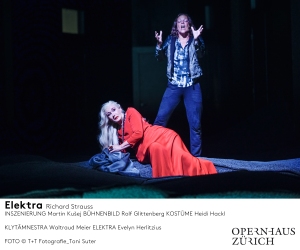 In the remainder of the cast, Christof Fischesser was huge of voice as Orest.  His bass-baritone dark and carved from granite, the vibrations even.  He brought a loneliness to his character, using the tone to illustrate Orest’s journey from cold visitor, to the tenderness of the realization of the rediscovery of a sibling.  Michael Laurenz was a beefier Aegisth than we often hear, the tone full and healthy, plausibly a toy boy for Klytämnestra.  There was a well-balanced group of maids – Irène Friedli coloured the text with wit and character.  Hamida Kristoffersen sang her lines in a dusky soprano with a cultured line, while Natalia Tanasii sang hers in a big, bold soprano, potentially a Chrysothemis in the making.  In his brief lines, Alexander Kiechle made an impression as the Tutor, with a youthful and handsome bass of easy resonance and sheen – a voice I’d like to hear more of.

The house band was on blazing form for Young, the sound physically overwhelming in this acoustic.  Young sounded completely at one with Herlitzius in her opening monologue, with both ladies approaching the dynamics and phrasing with striking unanimity.  Young also brought out a sense of the dance inherent in the score, the rhythms always pointed and vivid.  The winds sounded much more forward in the orchestral balance than we often hear, which meant that the interplay in the Elektra/Klytämnestra confrontation came through in a way I’d never heard before.  Young also proved herself a master in the use of orchestral colour to set a scene.  As Klytämnestra recounted her sleepless nights, Young surrounded these with a veil of sustained string sound as the low brass crept over the skin.  There were a couple of brief passages where it felt that tension sagged but overall, this was a very satisfying reading.  The brass were on decent form, despite a number of split notes along the way; while the strings were staggering in their accuracy, particularly in those rapid-fire figures as Elektra remembered forgetting to give Orest the axe. 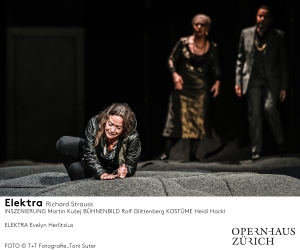 This was a real emotional rollercoaster of a performance.  No ordinary repertoire evening this, but instead an evening of high drama; of life, violence, and murder.  Kušej’s staging was most serviceable and, for the most part, convincing.  But it was in the musical rewards where this evening took wing.  Not only in Young’s vital conducting, but also in the satisfying depth of casting available to the house.  Then there was Herlitzius’ Elektra – vocally overwhelming and dramatically utterly compelling.  I have no doubt that in the, hopefully, very distant future, when I look back at a lifetime of opera-going, Herlitzius’ Elektra will sure be one of the greatest assumptions of a role I’ve had the privilege of seeing.  She doesn’t sing this role, she becomes it.  At the curtain call, the Zürich audience also responded as if they too had had a transcendental experience.