From Ashes to Riches : La Cenerentola at the Opernhaus Zürich

It might have been time to start putting the festive decorations away, but there was definitely a celebratory atmosphere at the jewel that is the intimately-sized Opernhaus Zürich, for this revival of Cesare Lievi’s 1994 staging of la Cenerentola.  The house had given the audience the kind of glamourous casting that ensured a great deal of interest, with Cecilia Bartoli as the titular heroine and Javier Camarena as her love interest, as well as the luxury of the period instruments of Orchestra La Scintilla in the pit. 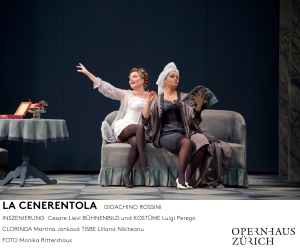 I must admit to being surprised that this staging was twenty-five years old, because it looks utterly fresh.  Lievi plays the story pretty straight, without any surprises, nor must it be said any particular new insights.  There were some impressive stage pictures – Angelina’s entry to the ball in a shimmering silver dress, while surrounded by footmen, their coats studded with lights, was certainly impressive.  As indeed was the set for Don Ramiro’s palace, viewed through doors at the mid-point of the stage, offering constantly changing images, giving an idea of the size of his palatial residence.  This was a physically active staging, especially for Bartoli’s Angelina, who was constantly running around the stage.  There were several deft comedic touches, such as Ramiro helping to clear up Don Magnifico’s living room by throwing some shoes into the fireplace.  Impressive also how rain penetrated into the living room during the storm, with Angelina scrambling to find some buckets to contain it.  Ultimately, it was an engaging framework for the musical performances to take place in.

The orchestra was absolutely superb.  From the opening chords, the period sonorities beguiled the ear and sounded so completely right.  Whether the unblemished beauty of the strings playing with minimal vibrato, the oaky character of the bassoons, or the piquant clarinets – it was a pleasure to hear this remarkable sound world come to life.  Attack was crisp, sforzandos meant something, and dynamics were executed with care and attention.  There was a physical immediacy to the sound that I found irresistible.  Gianluca Capuano led a reading of sculpted elegance, with the orchestra playing with immaculate precision off the stick.  His tempi were, by and large, well chosen.  There was one mis-judged moment with a loss of tension in the Act 1 finale, but the final pages of that act took flight at impressively breakneck speed, with no loss of coordination between stage and pit.

Bartoli was Bartoli.  I have long been fascinated by her technique, and have wondered for years how she can manage to make it work, but she’s been singing like this for over three decades and it clearly works for her.  Yes, the voice lacks amplitude and she was often inaudible in the ensembles.  While the bottom is full and rich, the top loses body and pitch – particularly in the first Ramiro/Angelina duet – wasn’t always accurate.  Yet she brings so much personality to her music, phrasing every line naturally with love and affection.  The immaculately-dispatched coloratura is less a technical display and more a means of communicating dramatic truth.  Her wonderfully open Roman vowels and impeccable diction gave much satisfaction.  Bartoli must have sung ‘non più mesta’ hundreds of times by now, but she still managed to make it sound completely fresh, through the charming use of embellishments to the line.

Camarena took a little while to settle, perhaps forgetting that he wasn’t singing at the Met, but rather in a much smaller house.  His opening scene saw him blasting out on all cylinders, providing some volume that really wasn’t required in a theatre of this scale.  He sang that opening duet with Bartoli with honeyed affection, shading the tone with delicacy – as indeed he did in his big scene in Act 2.  His impressively bright, well-placed tenor and the accuracy with which he deployed the florid writing was staggering.  Particularly, in precisely that big number, where he added some terrific variations, throwing in some stratospheric, full-voiced acuti for good measure.  The audience responded with a mid-act standing ovation and repeated cries of ‘bravo’ and ‘bis’ but, on this occasion, he didn’t oblige. 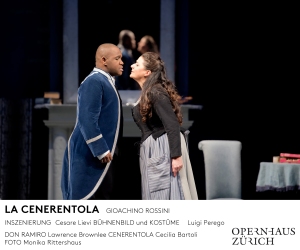 Oliver Widmer was actually this production’s first Dandini.  The voice took a while to come through – there was an acidic edge at first that added a harsh glare to his singing.  His legato is also rather aspirated which rendered the lines rather bumpy.  By Act 2, the tone had gained more warmth and his comic timing was certainly admirable.  Alessandro Corbelli was giving his house debut with this run.  His Don Magnifico was certainly sung off the text and he was never less than engaging to watch.  The voice has dried out now and he was often inaudible, even in a house of this size with period instruments.  Both Martina Janková and Liliana Nikiteanu were terrific value as the sisters, both throwing themselves into their roles with abandon, Janková with her bright, diamantine soprano and Nikiteanu with her fuller, orange-toned mezzo.  The big discovery in this cast was Stanislav Vorobyov as Alidoro.  A member of the house’s ensemble he’s most definitely a name to watch.  The voice is big and rounded, with an impeccable legato, no aspirates here, and an impressive ability to turn the corners.  The top narrows slightly, but he’s still young and this will come with time.

There was so much that gave pleasure in tonight’s Cenerentola.  For a revival, the quality of the performance was remarkable – particularly that fabulous orchestra bringing a revelatory range of colours to the score.  Lievi’s staging was never less than serviceable and allowed the action to flow easily as well as providing several comedic moments.  Yes, there were some inconsistencies in the singing, but it was a privilege to hear Bartoli bring those decades of experience to how she caressed the lines and Camarena swept all before him in his big scene.  Vorobyov was also a major discovery with a very bright future.  The audience rewarded the cast with a rapturous ovation.

I’m so happy to be back @bayerischestaatsoper for I masnadieri - a show we’ve waited for 3 years to see. With Van Horn, Castronovo, Golovatenko, Oropesa & more. Fogliani conducts Erath’s staging. #opera #operatravelling
Servus München! 🇪🇺🇩🇪 #münchen #operatravelling #servus
Curtain calls after Don Carlo @maggiomusicale A triumph for Eleonora Buratto as Elisabetta once again confirming her place as the greatest Italian soprano before the public today. She brought out so much meaning through the text, with a limpid line and beauty of tone. The remainder of the cast was adequate. Gatti’s conducting was just far too slow #opera #operatravelling
Delighted to be starting my operatic year @maggiomusicale for Don Carlo with Meli, Buratto, Cavalletti, Petrenko, Semenchuk, Vinogradov, Stavinsky & more. Gatti conducts Andò’s staging #opera #operatravelling
Curtain call after the Weihnachtsoratorium @sinfonica_mi by the Milanese ensemble laBarocca. A stylish congenial performance that was deliciously uplifting at the start of the new calendar year #music #concert #operatravelling #mostfestive #curtaincall
Very happy to be starting my 2023 musical year in the same way 2022 ended - with the Weihnachtsoratorium. This time in Milan with laBarocca & an interesting cast. Jais conducts. #concert #music #mostfestive