Saturday afternoon is often a time to watch a Cecil B DeMille style biblical epic and this is precisely what Andrea Cigni’s new staging of Nabucco at the Teatro Regio is.  Cigni gives us something that is very much of the past, with long flowing biblical chic costumes (Tommaso Lagattolla) and a big craggy set, consisting of a stone wall imbued with Hebrew inscriptions for the temple.  The Assyrians were dressed in gold, looking like extras who had just walked in from the original series of Star Trek. 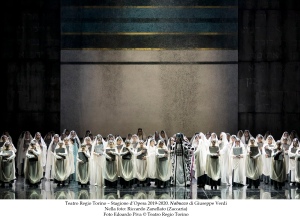 Yet within this biblical chic meets sci-fi setting, Cigni actually managed to give us a couple of memorable stage pictures.  For instance, when Nabucco declared himself god, he did so as a single spotlight focused on him falling to the floor in a puff of smoke.  Similarly, in the chorus ‘È l’Assiria una regina’, the rows of uniformed golden figures, overseen by Csilla Boross’s imperious Abigaille, were striking.  There was, regrettably, a lot of standing and delivering.  It meant that the stage pictures were often achieved by the sets being choreographed more than the singers, with various bit of stage furniture descending from the flies to add visual interest.  The chorus was marched on and off, and the impact of their first entry, which should really hit us in the face with a blaze of sound, was blunted by them being placed so far to the back of the Regio’s stage.  The principals spent most of the evening with arms outstretched, singing at the audience and barely engaging with each other. 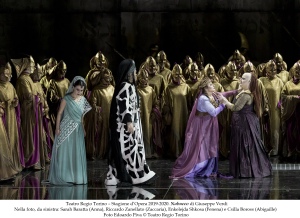 And yet I left the theatre, as dusk fell over this handsome city, feeling immensely satisfied with a sense of having witnessed something very special.  This was due to Leo Nucci’s assumption of the title role.  In his 78th year, Nucci gave us a singing lesson.  His artistry bears the hallmarks of a lifetime of work.  The legato is smooth, that implicit understanding of the idiom that cannot be taught is most certainly there, and Nucci also pulled out a massive high A-flat at the end of ‘o prodi miei, seguitemi’.  His lines begging clemency from Abigaille were so moving, Nucci pulling right back yet never losing the core of the tone.  His ‘Dio di Giuda’ was received with a massive ovation, thanks to the eloquence of his singing, the elegance of his phrasing, and the sheer depth of feeling he found. 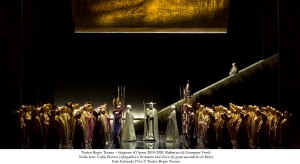 The other reason that this performance took wing was the heartfelt singing of Andrea Secchi’s chorus in ‘va’ pensiero’, sung with simplicity and sincerity.  The lines ‘oh mia patria, sì bella e perduta / Oh membranza sì cara e fatal’ have never felt as raw as they did today.  Their singing was well blended, anchored in a resonant bass line, with a closing diminuendo to that celebrated chorus that faded in unblemished beauty into nothingness. 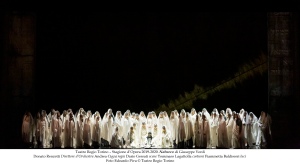 This was my first encounter with Boross and as Abigaille she definitely has volume.  She negotiated the florid writing accurately, never smudging it as is often the case, and she made a respectable attempt at a trill.  She rode the ensembles with ease.  The top is rather strident and penetrating – but it’s also undeniably exciting.  The bottom is somewhat hollow, lacking perhaps the ideal killer chestiness that the role benefits from, but Boross most certainly did not hold back, singing throughout with honesty and generosity. 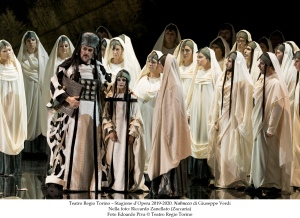 As Zaccaria, Riccardo Zanellato gave us a ‘tu sul labbro de’ veggenti’ of introspective dignity, singing with warmth and an inky beauty of tone.  Elsewhere, there was a tendency to push somewhat, with vibrations loosening slightly and the top losing colour.  That said, Zanellato gave us a dedicated account of his role.  Ştefan Pop was Ismaele, singing with Italianate ping, although his legato was rather aspirated.  His Fenena was Enkelejda Shkosa, who sang with a fruity mezzo with generous vibrations and an admirable sense of line – although the registers do seem to be parting company.  Sarah Baratta sang an Anna with pearly tone and Romano Dal Zovo a Gran Sacerdote in a resonant and liquid bass that suggested he might be a notable Zaccaria in the future. 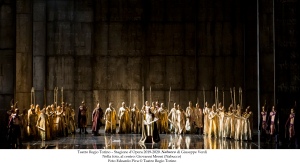 Donato Renzetti’s conducting was interesting. At first, it felt on the relaxed side, the faster tempi feeling earthbound, although he phrased the music with love and affection.  Perhaps he had an espresso at intermission because from then on, the performance seemed to take wing – rhythms were well pointed and Renzetti made this work sound like the heir to bel canto that it is, through the beauty of the orchestral phrasing.  The Regio orchestra was on excellent form – string intonation was true, brass on best behaviour, and characterful winds. 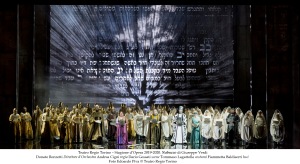 This was one of those shows that managed to transform a rather static staging into something very special.  It was a privilege to be able to see a master at work in Nucci’s singing, as well as that of the house chorus who sang with a depth of feeling that was immensely moving.  This afternoon’s performance was rapturously received by the audience.