The events of the past and the heavy hand of destiny are a constant presence in Iphigénie en Tauride, and Andreas Homoki’s staging for the Opernhaus Zürich very much brings these to the fore.  For this new production, the house engaged its resident period instrument orchestra, Orchestra La Scintilla, as well as a number of francophone principals – Stéphane Degout as Oreste and Quebecers Frédéric Antoun and Jean-François Lapointe as Pylade and Thoas respectively.  The title role was shared between Cecilia Bartoli and Norwegian soprano Birgitte Christensen who sang the role tonight. 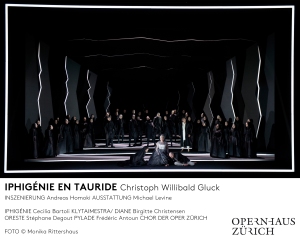 Homoki, together with conductor Gianluca Capuano, give us a shot of pure dramatic energy, going as far as to eliminate the intermissions in order to keep the tension running throughout.  Moreover, this is a piece of technically impressive theatre, the set (Michael Levine) a triangular black space where cracks of light appear, seemingly reflecting the gods intervening the action, as whenever they were mentioned, the cracks would appear.  Indeed, when Pylade promised to save Oreste, he ran into the light to make the rescue happen.  There was also some fascinating use of shadow (lighting by Franck Evin), with characters’ interactions being reflected on the walls.

This exploration of a world without escape from destiny is one that I found most convincing.  Particularly as Homoki used doubles to illustrate the ghosts of Clytemnestre, Agamemnon and a young Iphigénie and Oreste.  As Oreste was pursued by the Euménides, we actually saw him relive the murder of his mother.  Of course, the idea of the past feeding into the present has long been a preoccupation of Homoki’s – his Komische Oper Rosenkavalier explored a similar theme.  Another convincing aspect here was how Homoki set up the societal roles of men and women.  In this world, the women were veiled seers, living apart, interacting with each other as a homogenous block, led by Iphigénie.  The men in Thoas’s entourage wore blindfolds, their gaze hidden and their thirst for violence palpable.  Yet among this violence, there was love in Oreste and Pylade’s relationship.  There was an unmistakable chemistry between Degout’s Oreste and Antoun’s Pylade, with Pylade giving Oreste a passionate kiss to comfort him.  There was something incredibly moving in Pylade’s dedication to Oreste, the touching sense of a life-long love that I found extremely poignant.

Vocally also, Degout and Antoun gave a great deal of pleasure.  Degout brought out Oreste’s tortured nature, clearly a man struggling with PTSD, through commanding and unflinching vocalism, the text always clear and his baritone warm and full.  The voice sounded substantial, spitting out the text in ‘dieux! qui me poursuivez’ with desperate frustration.  Antoun’s Pylade sang his music with a classical beauty of line, pouring out streams of liquid tone in ‘unis dès la plus tendre enfance’, sung off the text – as indeed was everything he did.  The registers were absolutely even and the top opened up wonderfully.

There was so much that was good in Christensen’s Iphigénie.  She sang an exciting ‘je t’implore et je tremble’, finding the frustration in the text and the desperation within.  Similarly, in ‘Ô malheureuse Iphigénie’, Christensen sang with long lines, the top soaring with golden tone.  That said, I must admit to finding her assumption of the role inconsistent.  While the tone opened up nicely at fuller dynamics, when she pulled back it had a tendency to become brittle, losing the core.  Diction, particularly in the long flowing lines of ‘ô toi qui prolongeas mes jours’, was indistinct, Christensen singing over the text rather than with it – although she did add some attractive embellishments to the line.  Christensen certainly rose to a commanding final scene, but I left with the impression that her Iphigénie is very much a work in progress. 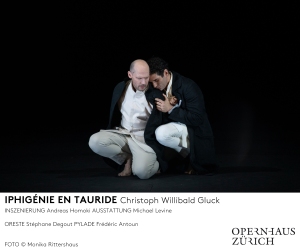 In the remainder of the cast, Jean-François Lapointe sang Thoas with a firm baritone and impeccable clarity of text.  Justyna Bluj was a big voiced Diane, while Katia Ledoux made much of little as the Femme grecque.  The house chorus was on enthusiastic form – balance wasn’t ideally optimal in the jubilant final chorus, with the men overprominent in the texture.  They threw themselves into everything asked of them, executing some complex stage movements and some impressively realistic brawling. 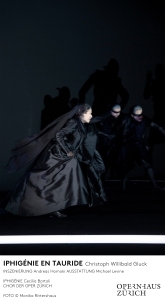 Capuano brought out a rainbow of instrumental colours from La Scintilla in the pit.  It struck me that Capuano seemed to be using the textures to magnify the vocal colour of the principals within the orchestral palette, making it sound very much a reflection of what we heard on stage.  His tempi were swift, every sforzando was filled with meaning, and he built up the tension inexorably in the scene where Iphigénie had to decide which one of Oreste and Pylade to sacrifice.  There were so many such intelligent uses of dynamics throughout the evening.  The orchestra whipped up a storm in the opening scene and the distinctive period sonorities reinforced the impression that this really was the way that the score should sound.  It really is hard to imagine it better played than we heard tonight.  The quality of the playing was staggering.

With this Iphigénie, Zurich, in a number of respects, once again has cemented its place in the premier league of international lyric theatres.  Homoki’s staging is a meditation on memory, of the power of destiny, and of love, both fraternal and between men.  Superbly sung by the gentlemen, with a dignified account of the title role, and sensationally played and conducted, this made for a compelling evening in the theatre.  It was received with a generous ovation by the Zurich public.